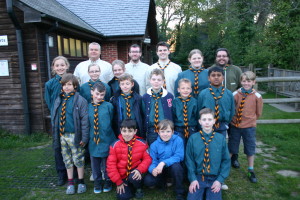 14 new Scouts and their leader found themselves being invested at the top of a high ropes course this week as their new Scout troop was officially launched.

A new Scout Troop, called St. Francis Scouts, has been set-up in a bid to tackle Poole’s ever-growing waiting list of young people wanting to get involved with the Scouting movement.

The Troop meet on a weekly basis in Parkstone but held an outside meeting this week on the high ropes course at Butchers Coppice Scout Campsite in Bournemouth. Each Scout took part in two hours of climbing, crate stacking and finally making their Scout promise 12 meters in the air at the top of the Gladiator Challenge, officially making them a member of the Scout Association. The activities were followed by a BBQ with friends and families of the Scouts all invited to attend.

Holly, a new Scout in the Troop, said: “I was nervous to start with, as I’d never done anything like this until today, but once I got to the top of the Gladiator Challenge I felt a real sense of achievement. I’m glad I did it now because I’m not so good with heights.”

The troop is led by Matt Horlock, an ex Scout from Poole who has recently moved back to the area, alongside Dean, who is a Cub leader at the same group, and three parents who have also volunteered their time to help run the troop. Matt, who also made his promise at the same time on the high ropes, said: “I’ve loved getting back involved with Scouting. I got so much from it when I was a member and it’s great to be able to give something back now.”

nthony Dakin, a Scouting representative in Poole, said: “Matt, alongside Aimee, Jon and Andrew, the three parents who have volunteered as Leaders, are great to have on board and a part of Scouting in Poole.”

“Scouting is open to anyone, from any background, and when we get people from different backgrounds working together for a common goal, it gives a powerful sense of purpose, fulfilment and pride. There is a feeling that anything is possible when we all pull together for the common good.”

For the full photo gallery, see our album on Facebook by clicking here.

St. George’s Day Celebration on Poole Quay
206 Beavers and their families on an adventure!